The underlying principle in reflection seismic profiling is identical with the one with the echo sounder on a ship: A source signal generated at the surface penetrates the ground in a vertical or near vertical direction. At layer boundaries, i.e. at interfaces of velocity contrasts, the signal is reflected back to the surface – as is the case with the signal of the echo sounding device at the sea bottom.

Unlike the echo sounding technique, where the transmitter and the receiver are assembled into one unit at the ship’s bottom, in seismic reflection surveys there is an arrangement of a large number of receivers (geophones) which record the signal emitted from a single source position (see figure below).

The reflection seismic data acquisition procedure is the classical roll-along technique: the recording arrangement consists of a number of geophone stations laid out at a regular, equidistant spacings with the source point usually in the middle of the spread. As with refraction seismic tomography, the seismic source may be of an impact type (hammer, weight dropper) or explosives fired in shallow boreholes. As the source moves up in the working direction of the seismic profile, a number of geophone stations, corresponding to the move-up distance of the source, at the rear end of the spread are disconnected and new stations are activated at the front end.

In this manner, reflection points on layer boundaries at various depths in the subsurface are sampled by a multitude of transmitter-receiver configurations resulting in a so-called multiple coverage of seismograms at each reflection point position. 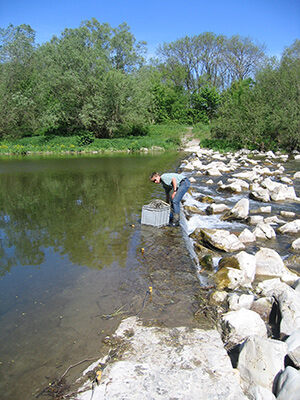