Seismic waves are acoustic signals traveling in elastic rock material. They can be divided in the two groups of a) body waves (compressional and transverse or shear waves) and b) surfaces waves (Rayleigh and Love waves). The body waves are traditionally used to map the rock density and elastic properties as well as structural inhomogeneities in the subsurface.

Surface waves, until recently rated as unavoidable self generated noise and having been treated as such, have seen a revival, because their information content can now be extracted thanks to the advances in modern data acquisition and processing tools. The analysis of the amplitude spectra of surface waves of the Rayleigh type provides a fairly accurate measure of the shear wave velocity distribution in the depth range between 10 m and 100 m. 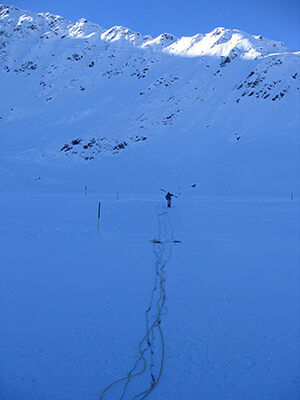