Walter Frei started his professional career as a merchant navy seaman in 1957 and, having served as chief officer on supertankers, fruit carriers, gas tankers and ore carriers, he started studying geophysics in 1971 which he completed with a diploma degree in 1975. He then spent the following six years with Shell in the Netherlands and in Irian Jaya (Indonesian New Guinea) working in seismic data acquisition, processing and well log data analysis. After moving to Switzerland he then held posts as a programmer developing wire line data evaluation software for a logging contractor, and as a part time assistant professor at the Swiss Federal Institute of Technology, lecturing seismic methods in civil engineering between 1982 and 1999. He was assistant director for the Swiss National Science Foundation Programme 20 (Deep Structures of the Swiss Alps) from 1985 until 1991 and as such responsible for the acquisition and processing of reflection seismic data. Walter co-founded GeoExpert in 1988 and has since then been its managing director.

University of Freiburg i. Br. (D), geologist, member of the board

Dieter Martin obtained his diploma degree in mineralogy in 1993. During the following 5 years he has worked on numerous research projects at concrete and material laboratories, for hydrochemical analysis studies for ground-water monitoring and with a German geophysical contractor for the acquisition & processing of geoelectrical, EM, GPR, gravimetry and well log data. After completing his degree in geology in 1998, Dieter continued working on various geophysical prospecting projects in mining, ground-water prospection and environmental studies both in Europe and West Africa. He joined GeoExpert in 1999 and has since then become an expert in seismic surveying methods for geotechnical and hydrogeological applications.

Fabian, as a trained accountant was until 2006 active in various professions, including as a hotel receptionist. From 2006 to 2012 and during his studies in environmental sciences at a technical college, he was a valued member of most of our seismic field crews as a freelancer. Since 2013 he is our indispensible allrounder as a draftsman, service technician for the maintenance of the seismic data acquisition equipment and as a seismic observer. 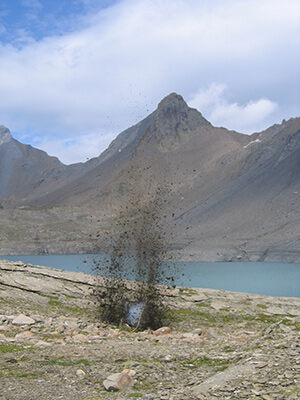